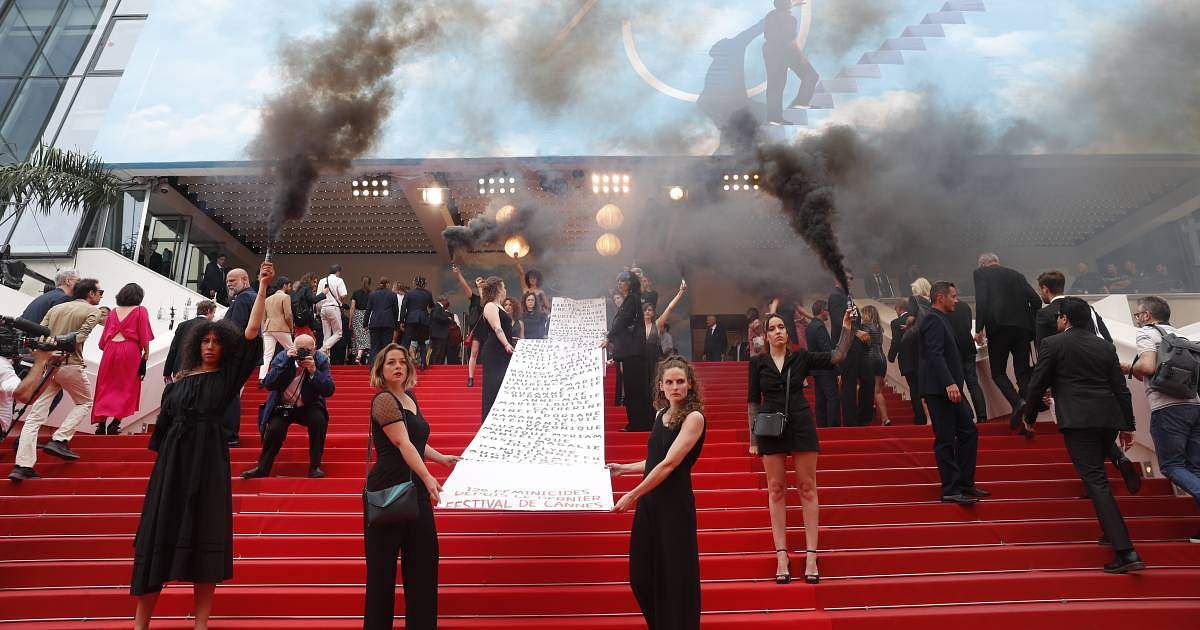 A group of feminist protesters staged a dramatic scene at the Cannes Film Festival, releasing smoke from handheld devices and displaying a long banner for the global press at the premiere of the Iranian film, Holy Spider.

According to Variety, at the premiere of director Ali Abbasi’s female-centered thriller, roughly 12 women in formal wear gathered on the famed stairs of the Palais with raised fists, filling the space with thick black smoke and holding a scroll with a list of 129 women’s names.

The list, according to the group, highlights 129 femicides in France since the last Cannes festival.

Feminicide is the intentional killing of women because they are female, reports Variety.

Security seemed unfazed by the event, allowing the protesters to be filmed and photographed.

One insider close to the production said the protest was not a coordinated stunt to promote the film, about a journalist who travels to the Iranian holy city of Mashhad to investigate a serial killer murdering sex workers.

According to the website Challenges, the protest was instead tied to the documentary Riposte screening in Cannes on Sunday, which is about feminist activists.

The protest happened before the cast and filmmakers of Holy Spider arrived, said the source, who added that the caravan of vehicles carrying talent was stopped briefly on the Boulevard de la Croisette before arriving at the top of the red carpet.

The film is based on the grim true story of serial killer Saeed Hanaei, who believed he was on a holy mission to cleanse the streets of sin, according to the film’s synopsis.

This is the second feminist protest the Cannes Film Festival has seen so far.

On May 20, an activist attending the world premiere of George Miller’s 3,000 Years of Longing staged a protest against purported sexual violence from Russian forces against the women of Ukraine.