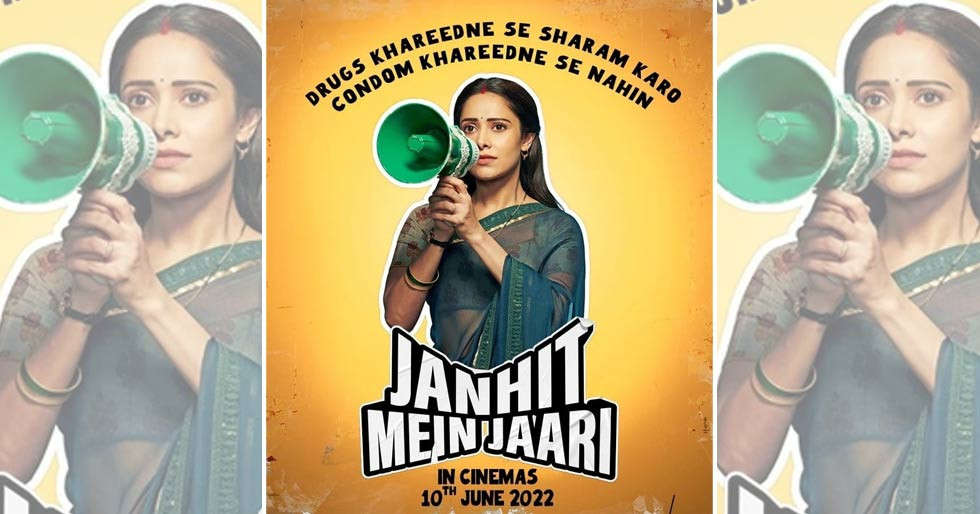 Manokamna (Nushrratt Bharuucha) has done a double MA and wants to land a well-paying job before getting married. Chance leads her to a condom manufacturer (Brijendra Kala), who sells the Little Umbrella brand of condoms. She’s hesitant at first of being a saleswoman for a condom company but later relents and her innovative ideas turn the fortune of the company around. She’s joined at this endeavour by her childhood friend (Paritosh Tripathi), who secretly loves her. Along the way, she befriends Manoranjan (Anud Singh Dhaka), a theatre artiste specialising in small time mythological dramas. She rapidly falls in love and marries him. Along with him, she also inherits a super conservative father-in-law (Vijay Raaz), an eccentric grandfather-in-law (Tinnu Anand), and a bevy of sister-in-laws. She gives up the job as her father-in-law is against it and starts selling Tupperware instead. Circumstances lead her to go back to her earlier job. She decides to be vocal about the safety aspects of condom usage and soon becomes a national figure because of the media. How she wins back the love of her in-laws forms the crux of the film.

Condoms have mostly been marketed as tools for enhancing pleasure. This film points out that their primary purpose is of ensuring a safe sexual conduct and that of family planning. It brings to our notice that so many unwanted abortions, which lead to health issues and even death among women, can be avoided by the timely use of condoms. Also, men usually don’t like using condoms and hence women demand it as a right for their own safety.

The first half is light and breezy. We’re introduced to our characters in a manner which reflects everyday middle-class life. From the onset, we can see that there’s something different about Manokamna. The way she fakes being pregnant to get seats in buses or her liking for wheat beer. Brijendra Kala’s rant on the influx of sex clinic ads make you smile. The dialogue is the king of the film. Witty and to the point, it sounds like real conversations between actual people and underlines the fears and desires of the middle class. The idea of a girl marketing condoms brings about its own set of complications and they do bring in laughter without resorting to cheap humour. Later, the family complications feel relatable as well. The film is said to be shot in Chanderi, Madhya Pradesh, and the well-captured local milieu adds to its flavour. The film is edited well and doesn’t lag in pace. The only point where it falters is when it goes extra preachy. The point of condoms being a safety valve for women is reiterated again and again. Nushrratt even breaks the fourth wall towards the end, which was uncalled for.

Nushrratt Bharuccha carries the film on her shoulders and doesn’t put a step wrong. She looks totally committed to the cause of sexual safety and her zeal shines across. She’s been seen as someone who excels in negative characters, and has shown here that she can play a character bursting with positivity as well. Vijay Raaz as the patriarchal father-in-law is dependable as always and so is Brijendra Kala as the kindhearted employer. Anud Singh Dhaka is a natural in front of the camera and doesn’t just play the good husband but has shades of grey as well. Paritosh Tripathi, who makes you smile playing the man having the hugest crush on his childhood friend.

Watch the film for its witty take on middle class life, the engaging acting by the ensemble cast and it’s message of having safe sex always.


Story: Manokamna Tripathi is a sales representative working for a local condom manufacturer in Orcha, Madhya Pradesh. A tragic turn of events pushes Manokamna to immerse herself more emotionally and responsibly into the job than ever before. Will she find her family, seeped in conservative and orthodox ideologies, standing by her side eventually or will she paddle through all alone? The answer to this question forms a considerable part of the narrative.

Review: Manokamna Tripathi (Nushrratt Bharuccha) has a ticking time-bomb on her head. Either she finds a job or she agrees to a matrimonial proposal that her parents have found for her. In her haste, she picks up a job as a sales representative at a local condom manufacturer Aadarniya’s (Brijendra Kala) company. How she straddles through the initial challenges of her job, creating awareness among men and women in a small-town in Madhya Pradesh and how she brings her conservative family onto her side forms the rest of the narrative.
What may seem like another story set in the heartland of India comes across as a funny and punch-line heavy narrative by writer Raaj Shandilyaa that addresses pertinent issues like abortion and contraception, especially the use of condoms for safe sex among other things. The film uses a generous dose of punchlines and witty one-liners, which Raaj is known for, to deliver the goods. The lines bear his signature. The screenplay is fast-paced through most of the 147-minute-run time. Though the lines are not the kind that will have instant recall value for being one of a kind, they are funny in most places. The film has plenty of comedy gags playing out between the supporting actors which provide a lot of relief to the subject at hand. The cinematography and production design are on-point, too. The locations, although explored in a few other films set in Madhya Pradesh before, have been used well.

Nushrratt Bharuccha carries the film on her shoulders confidently. Her performance is consistent throughout the film. In fact, hers is the only character that has a strong and visible arc developing throughout the runtime. Could the arc have been stronger? Yes. Could the hurdles in her character’s journey have been tougher to cross? Yes. And that could have strengthened the message that the film aims to deliver using her shoulders. It could have only made the film’s narrative that much more defined.

The supporting cast deserves special mention. Brijendra Kala, although has less screen time, is perfectly cast. Ditto Vijay Raaz, who is the representative of the patriarchal voice in a conservative family set-up. He not only picks the leheza perfectly but also holds on to the character firmly throughout its journey. Tinnu Anand, and a couple of other supporting artistes have also done a fine job and one would have liked to see a little more of them. Their conversation, especially the one between Manokamna’s co-sisters on the terrace, sparks up the dull moments in the narrative. It’s the punchlines delivered with perfect timing and style that shines.

One of the things that stands out for no apparent reason is Manokamna’s costume and overall look. It doesn’t blend with the setting in which the story unfolds. In terms of the writing, the romantic track between Ranjan (debutant Anud Singh Dhaka) and Manokamna feels too sped up and lacks the kind of emotional pull that it should have had. In fact, Ranjan’s character does not have a distinct and well-etched arc to follow. He just has a set of punch lines, which makes the character hollow.

Paritosh Pati Tripathi, who plays Devi, Manokamna’s best friend, could have been better utilised in the narrative than just being a mere side-kick who is also seemingly in love with her. The apparatus was all there but was not deployed in the writing room. Also, words like unbreakable and scratch are used in places where the people being addressed won’t probably get them at all. Between the last five years, there doesn’t seem to have been much change in the way the depiction of small-town India happens in our movies…a conservative setting that the protagonist has to fight, the presence of a cool sidekick and a journey of redefining the thinking of our society. In that sense, some of the elements in this film seem a tad predictable. Also, the film could have been tighter, which could have kept its perspective in place.

Another aspect which had potential to shine is the film’s music. Though there is ample scope for it throughout the film, the songs present in the album don’t make you hit the replay button. Overall, as a director, Jai Basantu Singh makes a confident Bollywood debut but he has a long way to go as the captain of the ship. This one’s a light-hearted film with a strong message which could have been packaged and delivered way better. However, what we get to see is a breezy and witty movie with its intent in the right place.