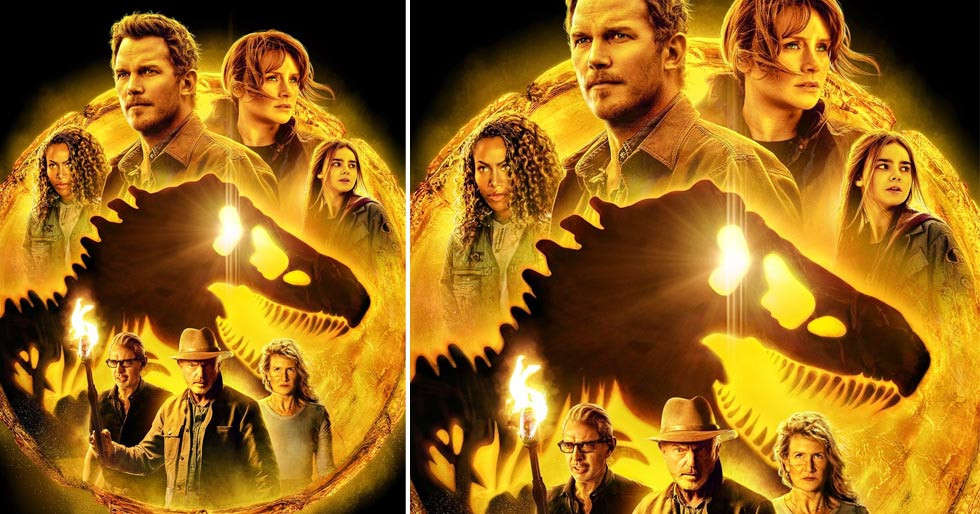 Four years after Isla Nublar was destroyed, dinosaurs now live alongside humans all over the world. Thanks to their novelty, a black market has opened up for dinosaurs, where they are sold as exotic pets. There’s even a sequence set in Malta where dinosaurs are made to fight each other, and humans, as gladiators. That’s one strand of the story. Another stand revolves around a dastardly plot by genetics lab Biosyn to raise pigeon-sized locusts. The main plotline involves the kidnapping and rescue of a human child as well as a dinosaur cub.

After the events of the last film, the couple from the new trilogy Owen Grady (Chris Pratt) and Claire Dearing (Bryce Dallas Howard), live remotely in a forest area along with Maisie Lockwood (Isabella Sermon), whom we learn is a clone of her own mother. She carries unique genes and has people looking for her, and hence needs to be protected. She gets kidnapped and her adoptive parents are on the lookout for her. Meanwhile, we’re re-introduced to the main characters from the original trilogy as well. Dr Ian Malcolm (Jeff Goldblum), warns his friends and fellow scientists Dr Alan Grant (Sam Neill) and Dr Ellie Sattler (Laura Dern) about the wrongdoings being committed at Biosyn and they come down to investigate.

The two strands merge when Owen and Claire too land-up at the faculty. In a series of disasters mimicking the first Jurassic Park film, things turn chaotic at the campus, leading to its total destruction towards the end. Both the young and old cast members have a series of hair-breadth escapes without ever coming to any actual harm and finally escape with the help of a renegade pilot Kayla Watts (DeWanda Wise).

The film’s production values are out of this world. It used 18 animatronics of varying sizes to bring a realistic feel to the viewer’s experience. An ample dose of CGI was utilised to make the dinosaurs seem as real as possible. In keeping with the current theories, fully feathered dinosaurs were also included in the mixture. The computer imagery blends seamlessly with actual footage. You can’t make out where reality ends and fiction begins. The film’s key moments are mostly shot with the POV of humans to give us an immersive feel. Your eyes dart from one corner to the other of the IMAX screen, trying to take it all at one go. The background score too keeps pace with the cinematography.

While the film offers a grand visual spectacle, it falters when it comes to the storytelling. The convoluted plot is more about pigeon-sized locusts than about dinosaurs terrorising the world. Then, the world governments would have just killed the big lizards and prevented an outbreak. Dinosaurs would have taken over the jungles and made other animals extinct and slowly would have turned to humans if they were allowed to breed unchecked. None of that is shown in the film. At the end, it’s in fact shown that the mammals assimilate their reptilian ancestors into their ecosystem, which is something totally unscientific. The ease at which a supremely guarded, secret faculty is breached and later escaped from defies belief. It’s as if God was guiding our heroes at every turn. Yes, you go to the movies to escape reality but there’s only so much that you can stretch the suspension of disbelief. In the first ever Jurassic Park film, what gave you the jitters was through the creation of constant tension and not through excess CGI dinosaurs. Less is more is said to be one of the cornerstones of good cinema. It’s something the makers of the present film seem to have forgotten.

The ensemble cast seem to have a gala time nevertheless performing heroics amidst the misguided mayhem. Fans would surely love the rekindling of romance between Ellie and Alan. The spark between Laura Dern and Sam Neill is alive and kicking after 30 years and that’s something indeed.

The film offers a grand sendoff to the cast of the original trilogy and kind of concludes an arc. But apart from indulging in major fan service, it serves no other purpose. Watch it for its visual appeal and for the sense of nostalgia it provides.


Synopsis: A bunch of visitors (old cast members of Jurassic franchise meet the new) must expose, survive and escape a dinosaur facility called Biosyn sanctuary (an evil corporate involved in genetic mutation and research), in order to restore ecological balance and protect the food chain. Old wine in a new bottle, eh?

Review: The film is set in the neo-Jurassic Age where humans and dinosaurs must learn to live together. Biosyn’s bizarre genetic mutations threaten to disrupt the coexistence. They unleash a lethal locust plague that can destroy the balance of nature. Foreseeing this crisis, the big three of the dinosaur universe — Dr. Ellie Sattler (Laura Dern), Dr. Alan Grant (Sam Neill) and Dr. Ian Malcolm (Jeff Goldblum), reunite to infiltrate the private valley hoping to avert the ecological disaster.

In a parallel track, Jurassic’s new age duo — Owen (Chris Pratt) and Claire (Bryce Dallas Howard) must also head to Biosyn in order to rescue their teen girl with a hidden past, Maisie (Isabella Sermon). The girl is kidnapped for being a ‘valuable intellectual property’.

Who cares about the plot in a Jurassic franchise as long as you get to gawk and be terrorised by the computer generated gigantic extinct species, right? It’s just a money spinner after all. Well, plot matters and the original proved how both can be finely interweaved. Not every sequel can match upto to original but even if you overlook the story, Colin Trevorrow squanders too much time before getting to what you expect from the supposed finale — nail biting survival action, fear and emotional bond.

After a rather far-fetched, meandering buildup, his crowded and chaotic survival saga comes alive only in the second half, which no surprises there, clones the original. The big three must escape the dinosaur island on a helicopter while babysitting a kid and Ellie and Alan must rekindle their romance, sigh.

While the jump scares and tension are not a patch on the 93 classic, a few scenes are jawdroppingly intense like the dinosaurs chasing Owen’s speeding bike and even performing parkour stunts. Jeff Goldblum’s trademark snappy wisecracks are once again the highlight of a rather predictable film.

Steven Spielberg set the bar too high way back in 1993, when he first introduced us to a fictional dinosaur island aka Jurassic Park and how a bunch of visitors must survive while on a tour, once things go awry. After a massive global fame, through the multiple instalments that followed over the years, the solo aim was to capitalise on the success of the original without rebuilding the survival thriller franchise.

One cannot latch onto the original for too long though as anything that refuses to adapt or evolve risks extinction. Jurassic World: Dominion has its moments but they are few and far between. Revisit the first film instead.