Saucy Santana Seemingly Responds To Resurfaced Tweets He Made 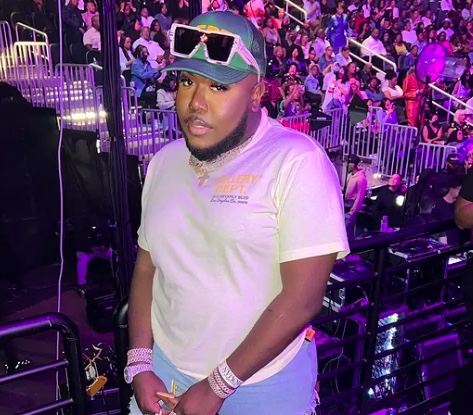 |
Saucy Santana Seemingly Responds To Resurfaced Tweets He Made

The Beehive never forgets! On a day that should be filled with well wishes for Saucy Santana, as he dropped his latest single ‘Booty’ featuring Latto, his name was trending for something other than his music. Earlier today, the rapper was called out for his disrespectful tweets toward Beyoncé and Blue Ivy in 2014. However, it looks like he is trying to balance out what he said with a few positive tweets he made throughout the years about the Queen Bee!

Santana uploaded two screenshots of tweets he made about the superstar from 2014, 2019, and 2022. “Lemme tell ya’ll something… Last night… Beyoncé was everything,” one tweet read. “Always stay gracious! Best revenge is your paper,” another stated. The Roommates sounded off in the comments and talked about how old tweets always catch people slipping. “Tweets always come back to haunt you,” one wrote. “Why don’t celebrities hire someone on their team to delete old tweets” another questioned.

One of Santana’s closest friends, Yung Miami, was also in the hot seat for resurfaced tweets. In August 2018, she received backlash for a homophobic tweet from 2013 which read, “Boy, Oh Boy. If I Ever See Any Gay S**t In My Son Imma Beat That Bo So Baddd.” Another tweet was from 2011 talking negatively about Haitians stating, “Haitians Are Black Ugly and Cheesy Don’t Matter What They Have On.”

According to Complex, the ‘Caresha Please’ host apologized, saying, “My deepest apologies and heart goes out to those who were offended by those tweets. The City Girls appreciate all of their support no matter what their sexuality is,” she wrote. “The comments I made about Haitians, I was wrong and immature to even let my opinion about an individual person be my opinion about an entire culture.”

Roommates, do you think Saucy Santana can redeem himself from this situation?