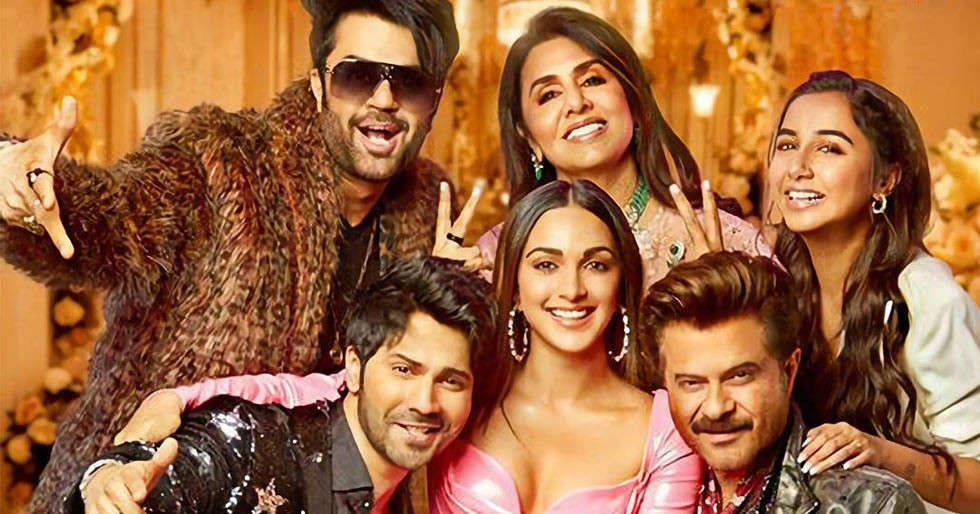 The film’s opening credits offer a montage of Varun Dhawan and Kiara Advani’s romance. It looks like a typical Bollywood love story at that point, till the twist thuds in.

Kuku (Varun) loved Naina (Kiara), since childhood. They grew up together and in time got married and settled in Canada. But five years down the line, their marriage is in doldrums. They want to part ways and decide to forgo telling their parents for the time being as Kuku’s younger sister Ginny (Prajakta Koli) is about to get married. But things get further complicated when Kuku’s father Bheem (Anil Kapoor) drops a bomb saying he too wants to divorce his wife Geeta (Neetu Kapoor). Meanwhile, Ginny too is having doubts about her arranged marriage…

Raj Mehta has made the film entirely relatable. Whether it’s the tension between a professionally successful partner and an unsuccessful one, the pain of living away from your homeland, the pressure of giving in to an arranged marriage just for the sake of getting ‘settled’ or the societal norms for couples becoming parents within a set time frame. The middle class for sure can relate to all this. But the treatment isn’t given to heavy handed melodrama but given a comedic turn. The film jumps from one situation to another, keeping you engaged throughout. The film is progressive in the sense that while it initially shows the son siding with the father to keep the family intact, he later rebels for the sake of his mother. The daughter-in-law too empathises with her mother-in-law despite being on the verge of estrangement herself. Women empowerment is the key here and not giving into traditional saat janmo ka bandhan. It’s all about loving your family with all their faults. The film’s characters are human beings with frailties rather than people who are paragons of virtue. JugJugg Jeeyo reminds you of Sooraj Barjatya films but the family drama comes with a modern, realistic twist.

The casting is spot on. Anil Kapoor is perfect as the patriarch feeling the pinch of 35 years of marriage. He’s yearning to break free and feels romance is the answer. He can be said to be the soul of the film. His is the most detailed character, full of different shades. He jumps from one layer to the other with hardly a hiccup and gains the audience’s sympathy despite being a total cad at times. He takes potshots at himself, laughing at his own obsession with being fit and having low body fat. It’s easily one of his best comic performances in recent times. It’s great to see Neetu Kapoor back on the silver screen. She’s such a natural that it feels like she never left. She plays the traditional homemaker who has learnt to overlook the foibles of her husband over the years but isn’t a martyr. She stands up for her rights and dignity when she has to. Varun Dhawan is cast as a slacker with an angst. He’s secretly envious of his wife’s success but has lived in denial about it. His issues get tumbling out one after the other in an emotional outburst with his wife and it’s easily one of his best scenes in the film. His camaraderie with Anil Kapoor is spot on and their scenes together are the highlight of the film. Kiara Advani too has plenty to do in the film. Her character too is multidimensional. Her chemistry with both Varun and Neetu Kapoor seems real. Maniesh Paul as her brother and Varun’s best friend gets the best lines and the actor adds to the film with his spot on reactions. Newbie Prajakta Koli, who is a well-known content creator on the internet, is in her element as well.

Watch the film for the acting chops displayed by the ensemble cast and for its modern take on good old fashioned family drama.