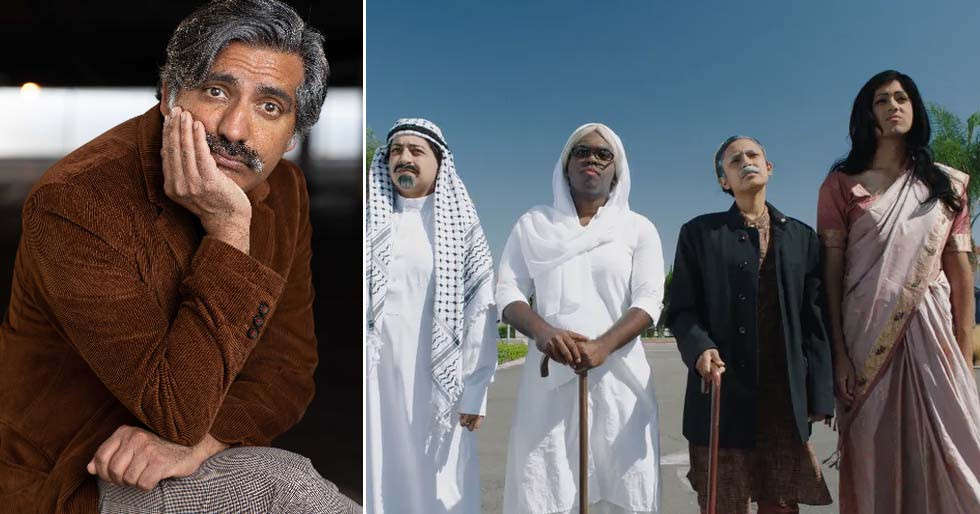 In Four Samosas, a heist comedy that premiered at the 2022 Tribeca Film Festival, four misfits hatch a plot to steal jewels from a supermarket in LA’s “Little India”. Between Vinny – a wannabe rapper, Zak – a Bollywood-obsessed dreamer, Anjali – a resourceful local news publisher and Paru – an IT graduate stuck in immigration hell, they’re quite the motley crew. Directed by Ravi Kapoor, the film plays out a hilarious chain of events as the characters unwittingly embark on a journey of self-discovery while trying to steal some diamonds.

After the film pulled off the ultimate heist of winning hearts at the international film festival, Filmfare caught up with Ravi Kapoor to dissect just what goes into creating loveable characters, brown representation in Hollywood and the unending craze for Bollywood.

Four Samosas has such a fun concept. How did you come up with it?

I’d always wanted to do a heist movie but a lo-fi heist movie, something that didn’t involve guns and car chases and big technical wizardry. I wanted to do something with higher emotional stakes, something that was a bit quirkier as well. I was exploring this concept six years ago and I never actually made it. When I came back to the idea I was excited to do something set in a Little India in North America because I wanted to explore that community as well. Then I started writing it with Venk, the lead actor in mind and I got excited about him being the lead and I thought he would be different from your typical movie lead. And it became clear that the movie was about community, about bringing people together for a project and I realised that in some ways.

How did you go about writing the characters?

Each of these characters are people who probably live on the fringes of life which is always what has fascinated me – people who are not a part of the mainstream. They’re often people when we see them in life we maybe won’t give them two looks. They’re eccentric and the film itself is eccentric. It’s a little bit of a circus. I wanted to make sure they had a little bit of a clown feel to them as well and in some ways. They’re all doing this heist for different reasons. What’s great is that they find each other by the end of the film. Even though they think they’re loners they discover that there’s a village for them to join.

There were a lot of influences that I have as a filmmaker but certainly Wes Anderson is somebody whose work is incredible. He’s obviously working on a level in terms of production design budgets that he’s able to play with. But for sure there is a visual connection to some of his films along with Delicatessen (Jean Pierre Jeunet, Marc Caro) a French film which is a massive influence. There’s certainly a connection with films like Napoleon Dynamite (Jared Hess) which is an offbeat comedy that came out about 15-20 years ago and became a cult classic. But I did want to create a very defined visual style for this film. A part of the way to do that was putting restrictions. For example, we only used one lens – the 14-millimetre lens for everything whether it was a wide shot or a close-up. We shot with a 3:4 aspect ratio so that we had more of a boxy frame and we added curved corners to give it a nostalgic feel so it feels like a VHS video. Also, I have to say that I was influenced by the silent films of Chaplin and Buster Keaton and early black and white films.

I didn’t want to hit the social aspects of the film over the head. I wanted them to just be integral to the characters and their world without it becoming an issue-based film. I wanted it to be fun and it’s a heist movie and a love story but I think in the world that the characters live in, these issues do exist. Like we have one character who is an IT immigrant who is dealing with green card issues and the frustration from that becomes a driving motivation. We do have characters who are looking to create a revolutionary homeland. They’re looking backwards rather than forwards and wanting to resurrect what they think they’ve left behind. All of those things are in the movie but I certainly didn’t want them to become the focus of it and just wanted them to be a part of the background landscape.

You have been working in the West for a while now. How has brown representation evolved over the years from your perspective?

I was in a show called Gideon’s Crossing and at that point, I was the only South Asian actor in a regular role on television. This was over 20 years ago. Now, you turn on the television and there’s a brown actor in almost every single show. When I first came to the US we were still very much used as the butt of the joke and it was all about doing the accent over the top and we were the comedic relief. We weren’t in control of the joke. I think now we’re seeing a lot more variety in representation. And we’re more in control of the joke and the narrative. I think Hollywood has recognised that there are stories to be told and there’s money to be made by diversifying what people see in front of the camera and diversifying what happens behind the camera too. People are ready to see each other’s stories and these windows to each other’s cultures are now profitable enterprises.

Between the hype around Ms. Marvel and RRR, South Asian films and shows are having a moment. Why do you think that’s happening and why now?

The public in general now is more open to other stories and other cultures. I think the whole streaming explosion has opened up audiences’ minds. I think Hollywood has underestimated people’s readiness to see stories from other places and now we can turn on the TV and watch a Korean drama or a South Asian drama from India or a Pakistani soap opera. It is also interesting that it has allowed more crossover stories as well.

Bollywood references are always a part of stories about Indians abroad. Can you talk about the significance that holds?

I think especially within South Asian American culture there are always a lot of callbacks to Bollywood. Most of our parents were born and raised in India and then moved to the US  or the UK and one of the things that kept them connected to their homeland was Bollywood films. Bollywood has remained a touchstone and it’s become an umbilical cord to a past that we maybe never really knew as well. So one of the characters in Four Samosas dreams of going to Bollywood and becoming an actor. He doesn’t really know what that entails but it’s one way for him to connect to a place he’s never really known but in some ways is a little bit of fantasy. Bollywood has definitely created a fantasy that we have in our minds about India. And he realises that he can get that fantasy some other way – what he’s really looking for is love. In some ways, Bollywood and love are very similar things. They’re so consuming and so big and they both open up your hearts despite yourself.