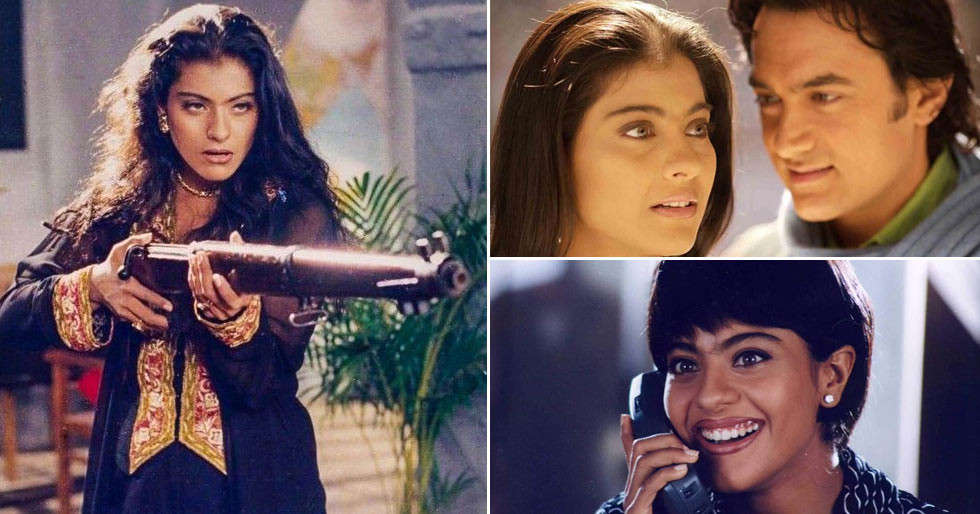 Kajol is a generation-defining actor with back-to-back superhit movies under her sleeve. The actress made her debut in 1992 with the movie Bekhudi and recently celebrated 30 years in the movie industry. In these three decades, she has blessed the industry with memorable performances that have led to her winning multiple accolades that include six Filmfare Awards and the Padma Shri, presented by the Government of India. She is also the first woman to win the Filmfare Award for Best Actress in a Negative Role.

Kajol has presented a wide acting range to the audience with movies that have left an impact on Indian cinema. Kajol created a wave in the industry as the female lead in Dilwale Dulhania Le Jayenge, a love story that defined romance as seen in cinemas. Soon after, she was seen in Gupt playing the polar-opposite role of a psychopathic killer. Her character, Anjali, from the cult movie Kuch Kuch Hota Hai, is a classic, and the movie created a precedent for high-school romance in cinema. In the movie My Name Is Khan, she plays the role of a mother who loses her only son. For her acting prowess in the movie, she won another Filmfare Award for Best Actress. She has chosen not only critically acclaimed projects, but also films that have been extremely successful at the box office. Her highest-grossing movies include Dilwale and Tanhaji.

But Kajol has time and again proved that she likes to experiment with the kinds of roles she plays. The actress has revealed on several occasions that she doesn’t like to be typecast and is always on the lookout for roles that are out of the ordinary. Over the years, the actress has picked multiple unconventional stories and did justice to the powerful roles. As Kajol turns a year older today, we take a look at the unconventional roles she has played.

Dushman is a psychological thriller movie from 1998 directed by Tanuja Chandra. It is loosely based on the Hollywood movie Eye for an Eye. Kajol plays a double role in the movie as twin sisters Naina and Sonia. Kajol won critical acclaim and a Filmfare Award nomination for Best Actress for her role in the movie. When a sadistic killer and rapist, Gokul, brutally kills and rapes Sonia, her twin sister Naina is set to exact her revenge. She also seeks help to get rid of her fear of the killer and does intense training. Eventually, she decides to make a bold move by going after the killer herself. In a fight that ensues, Naina gets caught by Gokul but manages to free herself and shoots Gokul.

Kajol also starred in a modern suspense movie that won her accolades and widespread fame. Rajiv Rai’s directorial movie Gupt is known for its mind-bending twist at the end, and Kajol plays a grey-shaded character in what is considered as one of the best thriller movies in Indian cinema. In the movie, Kajol plays the role of Isha, who is in love with Sahil Sinha and wants to get married to him. A heated argument erupts when Sahil’s father insists that he must marry the woman of his choice. Soon, his father turns up dead, and Sahil is framed for his estranged father’s murder. However, Sahil escapes prison and is set on the path of finding the real murderer. Gupt is a gripping watch which will keep you hooked to the seat while you wonder who killed Jaisingh Sinha. Kajol’s streak of playing the love interest in movies was broken, and the audience got a deeper understanding of her wide acting range. For her performance in Gupt, Kajol became the first actress in history to bag the Filmfare Award for Best Actress in a Negative Role.

We Are Family is a family drama directed by Siddharth Malhotra that stars Kajol in the lead role along with Arjun Rampal and Kareena Kapoor Khan. Kajol plays the role of Maya, a former book publisher and mother of three children that she shares with her ex-husband, Aman. Even though she is divorced from Aman, she feels that the family dimensions have changed when his girlfriend Shreya (Kareena) comes into the picture. Even though there is considerable friction between Shreya and Maya, things get smoother with time. When Maya is diagnosed with cervical cancer, she realises that the children will need a mother figure in their lives and wants Shreya to step in after she passes away. The story speaks volumes about the unconditional love of a mother.

Kajol plays the unconventional role of an overprotective single mother in the movie Helicopter Eela, which is directed by Pradeep Sarkar. The movie traces Eela’s life, played by Kajol. Eela is on the rise to becoming a successful model and singer but decides to get married to her boyfriend, Arun. She gives birth to a baby boy, Vivan, after a few months. The couple tragically finds out that many male members of Arun’s family died in their late 30s. This deeply disturbs Arun, who leaves Eela and Vivan to fulfil his dreams and passes away later. Eela becomes extremely protective of her son, whom she fears will have the same fate as his father. Even when her son starts college, she makes the decision to attend college with him. But her life takes a drastic turn when her son decides to leave home to give her the space she needs. In the years that follow, she resumes her singing career and is happy and fulfilled.

Fanaa is a romantic thriller movie directed by Kunal Kohli and starring Kajol and Aamir Khan. Kajol plays the role of a blind Kashmiri woman, Zooni Ali Beg, who falls in love with a tourist guide, Rehan Qadri, played by Aamir Khan. The couple gets married, and Zooni undergoes surgery to improve her eyes. However, the happy couple are separated after a terrorist attack. Rehan is reportedly killed, and Zooni is left grieving. It was later found out that Aamir Khan was an insurgent who was the mastermind behind the attacks. Years later, in a shocking twist, Zooni and Rehan meet. Rehan finds out that he has a son who was raised by Zooni and is named after him. He hides the fact that he is a terrorist from both his wife and son. However, the truth doesn’t stay hidden for too long, and when Zooni finds out, she is conflicted about how to deal with the heartbreaking situation. For her stellar performance in the movie, Kajol has won many accolades, including a Filmfare Award for Best Actress.