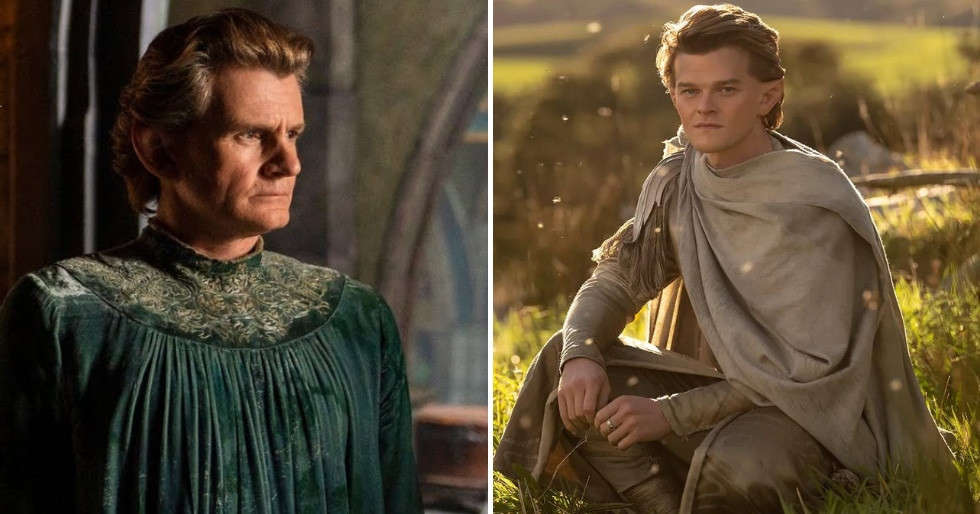 We’re days away from the highly-anticipated release of The Lord of the Rings: The Rings of Power. The newest addition to the sprawling LOTR franchise is a prequel to Peter Jackson’s  Lord of the Rings films and The Hobbit. Set thousands of years before the films, the show will take fans into the Second Age of Middle-earth. Created by J.D. Payne and Patrick McKay, it brings together some familiar characters along with several new names and unseen terrains as it explores everything that went into the creation of the Rings of Power. The large ensemble cast includes Robert Aramayo as Elrond, a half-Elven character we’ve seen before and Charles Edwards as Celebrimbor, a master smith.

In an exclusive interview ahead of the show’s release, the actors opened up about their characters, playing out quiet moments amidst big set pieces and going down the rabbit hole of Tolkien theories.

The Rings of Power pulls you back into Middle-earth. What was that pinch-me moment on the sets like for you?

Robert: It was a canopy of pinch-me moments haha. There is a lot in this show. You are blown away by the set or an actor or a costume or something creative. The art department is amazing. Their ability to transform an already beautiful New Zealand, it’s just too amazing for words. So yeah, there were a lot of those moments.

Elrond has been portrayed in Peter Jackson’s Lord of the Rings films before. Did you take any cues from that performance or did you want to break away from that?

Robert: I really wanted to explore his past and history, the things that have come before the Elrond that we meet in movies – his father, his mother and his brother who achieves incredible things. He’s an orphan. Charles and I also share a sort of connection to the sons of Fëanor in this really interesting way that we got to talk about quite a bit. So I think diving into the past was a very good place to begin.

Charles, your character forges the Elven rings and he’s manipulated by Sauron but very little is known about him. What was your process of researching for this role?

Charles: Well, you start with what Tolkien has written which isn’t very much. Celebrimbor is mentioned in the Lord of the Rings on the council of Elrond. He mentions him when he’s recounting the tale of the forging of the rings of power and Celebrimbor also made what contributed to the creation of The Doors of Durin in Moria. Other than that, there are only two mentions in the Lord of the Rings that he gets. But in Tolkien’s appendices, when we further go into the Second Age which is where our show takes its inspiration from, he has been sketched out a bit further. So you have a basic outline but even Tolkien’s versions contradicted each other as he does with many other things. To me, that’s very exciting – that there is not one version that you have to adhere to. There’s certainly scope to take what Tolkien implies and run with it. So that’s been a very satisfying experience for me.

The Rings of Power has all these visually stunning moments. When you’re on set what is your process of making your performance shine amidst all the big set pieces? Robert: The visuals really help you. Obviously, you don’t want to get lost in them but we’ve spoken a lot about Celebrimbor’s workshop which hugely helped the scenes where Charles and I were working together. Obviously, most parts were what Charles was doing and responding to that. But the set itself is just breathtaking and so detailed.

Charles: And to ensure that what you said didn’t happen, Robert and I did a lot of scenes together and we established a very close connection with each other and kept to the truth of what we were playing. Because what you forget is that yes, there are huge set pieces but when you’re doing the scene the camera is right here so while there’s so much in the background when you’ve got a quiet scene or a tense scene to work with the camera is very much with you. So that worry didn’t come up too much for me.

There is a lot of anticipation around the show. Have you had the chance to dabble in fan theories and reactions?

Robert: I used to go down the rabbit hole of Elrond, years ago before I obviously knew that I’d be playing him. I used to always be interested in certain decisions that he made in the Legendarium so I’ve been down these rabbit holes and they’re very enjoyable. I try to avoid them now but now I know how enjoyable it is to make your own decisions and that’s what I like about Tolkien – everyone’s got a very unique perspective based on their opinion of what they’ve read. And one opinion can be as astounding as another and they could be completely contradicting each other.

Charles: And it’s all good because it all comes from passion. We have the passion and so do the fans. And yes, heated arguments are always inevitable when there’s a topic like this to talk about so it’s all good.

If you hadn’t bagged these roles, which Tolkien characters would you like to play and why?

Robert: I always liked this hero from the First Age called Beleg Strongbow who’s a very wonderful character, a Sindarin Elf. And quite a few tragic things happen to him but he’s a real Elven hero. I really enjoyed reading about him.

Lord of the Rings: The Rings of Power is set to release on September 2