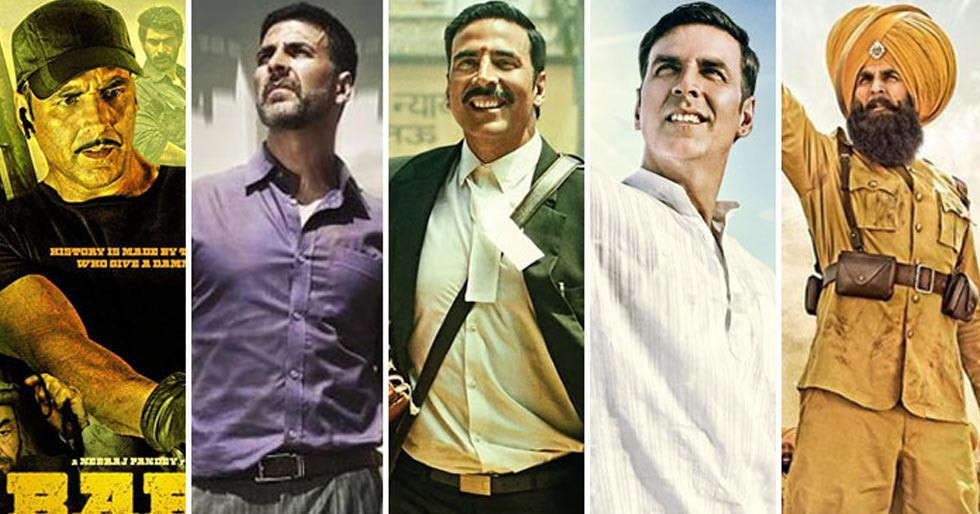 Akshay Kumar has demonstrated over the course of a 30-year career that he is the undeniable superstar of the Hindi film industry driven by perseverance, focus, and dedication. The actor has a huge fan base that supports him not only in his films but also in all his efforts to promote various causes. With the love of his fans and his undeniable charm, he’s truly the binary superstar of Bollywood.

Besides having done numerous films over the years, the actor has also championed social problems, managed to speak up for women’s rights and offer martial arts self-defense classes to women.

Even as an actor, there is no field he hasn’t explored. Right from action, comedy, romance, biopic, you name it, and Akshay Kumar has not just done it in his film career, but also aced them by breaking box office records!

Today on the occasion of his 55th, we are deciphering Akshay’s path to becoming Bollywood’s “ideal all-rounder”- or, as they like to say, “One man, many roles”!

With Saugandh, Akshay made his Hindi film debut in 1991. However, it was his performance in the suspenseful drama Khiladi a year later that changed everything for him. It was that movie that gave him the title of “Khiladi of Bollywood.” and showcased his quick movements, action hero demeanour, and careful martial actors sequences. These earned him accolades and he gained a lot of popularity as the ultimate action hero of bollywood. His proficiency in martial arts was also highlighted by later films like Deedar, Insaaf, Daava, Barood, Zulmi, and Jaanwar, among many more.

Rowdy Rathore, in which Akshay Kumar plays a double role is one of his most famous action films that made it to the 100 crore club and also had everyone copying his moves. Holiday, which is a remake of Tamil Film Thuppakki features Akshay Kumar as a captain in the DIA, chasing goons and saving the city from bomb blasts. The stylized action in the movie won praise. The climactic scene where Akshay destroys Freddy Daruwala and his goons, makes the ticket completely worth the price.

More recent releases like Boss, Gabbar Is Back, Singh Is Kinng, Tashan and more recent hits like Bachchhan Pandey are also action-comedy movies where Akshay Kumar has showcased his skills effortlessly.

While the audience was enjoying the “Khiladi’s” action-oriented portrayal, Akshay had moved onto the comedy genre as a means of changing the action hero stereotype. He always spoke about the significance of reinventing oneself, saying that an actor can only grow and learn when he experiments.

In 2000, he began his journey by working in the iconic comedy Hera Pheri as well as the Dharmesh Darshan directed love triangle Dhadkan. To experiment he went on to portray a negative role in Ajnabee which won him the Filmfare for Best Villain. He went on to feature in hits such as Aitraaz, Mujhse Shaadi Karogi, Singh Is Kinng, Garam Masala too. Welcome was another iconic comedy movie that starred Akshay Kumar, alongside comedy aces such as Anil Kapoor, Paresh Rawal and Nana Patekar. It was a rollercoaster of laughs and giggles as the audience watched it. Bhool Bhulaiyaa, Heyy Babyy and Namastey London are also some top-notch laughter riots.

Some of Akshay Kumar’s romance, and romance comedies are truly a fun watch. You can’t help but go aww as you watch him pulling all sorts of crazy antics to woo his lady love! Namastey London is one of the finest romantic comedies with Akshay Kumar playing a spontaneous Punjabi boy starring alongside Katrina Kaif, a british Diva! The super cute yet funny shenanigans that ensue are a treat to watch.

Desi Boyz is another adorable movie with the right mix of romance and comedy, with his camaraderie with John Abraham as well as his steamy romance with Chitrangada Singh. Infact almost all his movies including Sinngh Is King, Mujhse Shaadi Karogi and Toilet: Ek Prem Katha have the right bit of romance.

Akshay Kumar is one of the few mainstream actors that gladly accepts films with socially significant topics as well as those that promote nationalism and patriotism. A fun fact is that, if you look back over the last ten years, you’ll notice that Akshay has starred in at least one movie from this genre over the years including the films OMG- Oh My God!, Special 26, Holiday, Airlift, Rustom, Jolly LLB, Toilet: Ek Prem Katha, Padman, Gold, Kisari, Mission Mangal, and the more recent releases Bell Bottom and Sooryavanshi. He portrays some variation of “the son of the land” in each of these movies, and he outdoes himself with each one.

With Baby, he played a deadly covert RAW agent on a mission to eliminate major terrorists. Another movie Airlift, is based on the famous human evacuation from Kuwait. Akshay experienced success once more after adapting his strategy and developing a subtly layered character. Patriotism once again came to his aid.

Toilet: Ek Prem Katha is also another movie in the genre. It is based on his wife Twinkle Khanna’s book The Legend of Laxmi Prasad and it has set out to create social awareness about menstruation and how it’s not a taboo but instead a process that is natural and one that women go through each month.

Thriller movies starring Akshay Kumar are like a shot of adrenaline. Murder, heists, suspense and edge of the seat moments are all the ingredients you can look forward too. Like ‘Naam Shabana’ is an action thriller based on two agents working under an International arms dealer. It features Taapsee Pannu alongside Akshay Kumar, and is nothing short of a rollercoaster ride.

Another recent hit that is a new release is Cuttputlli. This Hotstar original film is an official remake of the Tamil film, Ratsaaan. It’s based on a series of murders that is placed in Kasauli, and features Akshay Kumar as man on a mission to find a serial killer.

Not only is Akshay Kumar a brilliant artist but also a great performer. He is a force to reckon with, and truly resembles a one-man business in Bollywood. He has demonstrated his strength throughout the past decade and more, and has a significant impact on Indian cinema. On the occasion of his 55th birthday, we hope for more laughs, great moments and energy packed movies.

Decoding Akshay Kumar: We break down the evolution of Khiladi Kumar...

Sequel for Pixar’s Inside Out is reportedly in the works- Cinema...