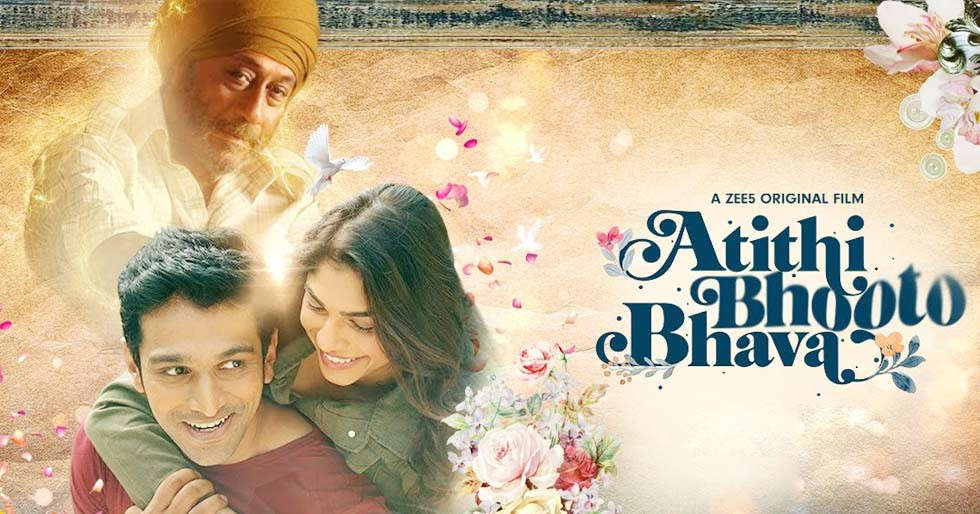 Atithi Bhooto Bhava is a story of Srikant Shirodkar (Pratik Gandhi), a stand-up comedian who has a blow-hot, blow-cold relationship with her flight attendant girlfriend Netra Bannerjee (Sharmin Segal). Life takes a turn when he comes into contact with a Sikh ghost, Makhan Singh (Jackie Shroff). Makhan thinks Srikant is his reincarnated grandfather who passed away in 1975. Makhan was just a teenager then and had run away to Mumbai as he couldn’t bear the twin loss of his grandfather passing away and his girlfriend getting engaged to someone else. Now, he wants to go back to Mathura to catch a last glimpse of his beloved, as he feels that’s what’s keeping him rooted on earth. Shrikant takes up the trip along with Netra and his bestie Sucharita (Divinaa Thackur). The road trip from Mumbai to UP teaches all three friends some necessary life lessons. They get to know the value of friendship, of family, of real love and become better people in the process. Srikant and Netra come closer as a couple as well, which might be something that Makhan Singh intended from the start.

Films with friendly ghosts have been made before. Chamatkar (1992) and Phillauri (2017) immediately come to mind. Atithi Bhooto Bhava kind of continues the legacy. In an era where raunchy and toilet humour holds sway, you smile when you see a ghost getting thrown out of a car because he hadn’t put on a seatbelt. Apart from the light-hearted humour bordering on the silly, the film is peppered by homilies on relationships. That too is a gag because Makhan is repeating things his grandfather had taught him to a man he believes is his born again grandfather. The film keeps it simple, with Makhan not interfering much and letting the couple iron out the kinks in their relationship mostly by themselves. It’s a feel good film from start to finish where nice people become nicer at the end.

The film leans heavily on Jackie Shroff’s charm. He’s totally likeable as a friendly ghost. The man can surely act and plays his character with a light touch, keeping things simple, reacting to co-stars and situations, remaining true to the story throughout. What can one say about Pratik Gandhi? He’s a complete actor who not only modulates his voice properly – the younger and older versions sound different – but also gets both the Punjabi and Marathi accents right. Such is his form currently that he could do no wrong. He shares an easy on-screen camaraderie with Jackie Shroff in the film, which was crucial, as he’s shown to be the only one who can see the ghost. Sharmin too looks convincing as the girl who has a hard time adjusting to her man’s quirks. She and Pratik come out as a real couple. Their problems are everyday problems blown out of proportion and the actors complement each other’s performances. Divinaa Thackur is competent as the understanding best friend.

The film could have more fun with the ghost’s character by employing better special effects but didn’t take up on the opportunity. Athithi Bhuto Bhava isn’t a laugh-out-loud comedy but would surely bring a smile to your face…


Story: ‘Atithi Bhooto Bhava’ is about a stand-up comedian who in an inebriated state, meets a ghost. Things take a bizarre turn when the ghost requests the stand-up comedian to help him meet his long-lost love.

Review: ‘Atithi Bhooto Bhava’ is one of those films that tries hard to ensure that the sequences in the film are pitch perfect and everything falls into place, but the outcome is just the opposite and everything actually falls flat. The final outcome is far from satisfactory. Director Hardik Gajjar takes the help of an old formula and tries to give his own twist to the tale. A friendly ghost meeting a common man and the subsequent unfolding of events can now at best be described as a clichéd theme.
This comedy-drama is about a stand-up comedian, Shrikant Shirodkar, who is in a live-in relationship with Netra, an air hostess. While Netra follows a regular day job routine, Shrikant takes care of household tasks, including cooking. Though Shrikant is committed to Netra, his “shrugging” attitude sometimes is a major turn-off for Netra, which often results in bitter fights between the two. One day, while on his way back home, Shrikant encounters Maakhan Singh, a 55-year-old Sikh who helps him by ensuring he reaches his home safely. Little does he realize that the man is a ghost and in another life, Shrikant was his grandfather. He offers to leave his house on the condition that he helps him meet his long-lost love, who lives in Mathura. A lot transpires during the journey from Mumbai to Agra, and that forms the crux of the story.

While the film does sparkle in a few sequences, it remains dead wood till the end. This film primarily remains a comedy, but the chuckles are few and far between. The film employs old tropes to move the story forward. The only chuckles this film manages to deliver are through a bartender and a housemaid. Prateek Gandhi and Jackie Shroff are virtually in every frame of the film, and one must not forget that comedy is not their greatest weapon.

Sample this – there is a sequence in ‘Atithi Bhooto Bhava’ when a Punjabi character asks his lady love “Tumhara roka ho gaya?”. The answer he is greeted with is “Kisi ne roka hi nahi.” Now this also gives a peek into the mood of the dialogues of the film. A doctor crying at the sight of a ghost and Jackie getting into the body of a female Dhaba owner and then speaking in a manly voice is just not the right tool to evoke laughter. The film actually tries too hard on many fronts to evoke laughter, but one sees through and finds out that it’s not working.

Prateek Gandhi steps into a character that is close to being a ‘dude’ and delivers mixed results. He delivers a sincere performance, but an average screenplay prevents him from going all out. It’s evident that Jackie Shroff knew pretty well what he was getting into. He must have figured out that the role is a cakewalk for him and thus did not put in much effort, which in the end looks more like an average performance. It’s a bit of a mystery that the director did not give much screen space to Anuradha Patel, who appears towards the end for a few minutes sans dialogues. One only wishes that Hardik Gajjar and his team would have worked more on the screenplay of the film and refined it.

‘Atithi Bhooto Bhava’ is a film that can be watched at any point in time without any expectation. It does not tax your brain but at the same time, it is also devoid of any merit.