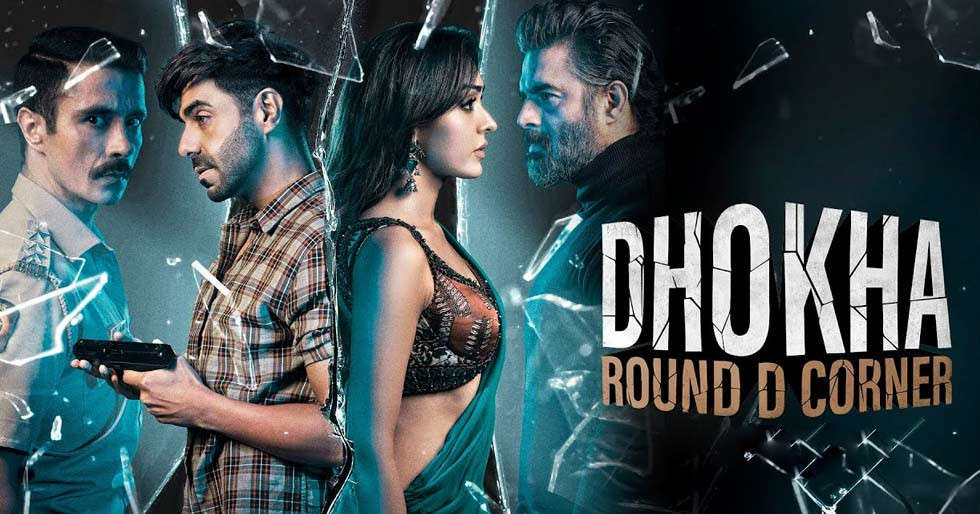 Yatharth Sinha (R Madhavan) and Sanchi Sinha (Khushalii Kumar) are a couple who were happy once but are now continuously fighting. At a time when Yatharth is away, a terrorist who’s one the run, Haq Gul (Aparkshakti Khurana), barges into their posh Mumbai home and takes Sanchi hostage. Hot on his pursuit is the dedicated cop, ACP Harishchandra Malik (Darshan Kumaar) who’d do his utmost to get the criminal back. But all is not what it seems. Sanchi apparently suffers from severe mental trauma and has a multiple personality disorder. The terrorist might have a gun but that doesn’t make him immune to her charms. And the husband too seems to have secrets of his own. Now, the situation has become a waiting game, a four-way Mexican stand-off between the hostage, the terrorist, the cop and the husband.

Dhokha: Round D Corner is full of twists which get revealed at regular intervals. The film is told through a multiple-narrative format. Each main character tells the story with embellishments attached. Soon, there are different versions of truth floating around and you don’t know which narrative to believe in. You come to know that every character is following their own agenda. Even the climax doesn’t completely make the picture crystal clear but keeps a few strands hanging. It’s a film where nothing is completely black or white. We come across shades of grey. No one is totally a sinner and no one is totally innocent either. It’s an interesting premise to be sure. Director Kookie Gulati has utilised noir elements. Noir films told us that human beings are quite capable of duplicity and their true nature reveals itself when they get a chance to harm one another. That’s been brought out in the present film as well. While the writing and direction is otherwise competent, the second half does drag out a bit. The end credits scenes featuring Aparshakti weren’t truly needed.

The film is the stepping stone of Khushalii Kumar into the world of acting. She could have had a soft launch by acting in a romantic comedy but chose to essay a difficult role in a psychological thriller. It says a lot about her confidence that she did so. She convincingly plays a woman with delusional personality disorder. Her role requires her to change from a bored housewife to a seductress, and back to being her normal self and she does it without any apparent glitches. She’s made a good start to her career and let’s see where her journey takes her next.

Darshan Kumar is as reliable as they come and his tough cop act is upto the mark. Madhavan has been rediscovering himself doing grey-shaded roles and he’s in his element here once more as the husband with lots of skeletons in his closet. He glides through the role with characteristic panache. Aparshakti plays a naive and gullible terrorist who loses mental equilibrum thanks to the experiences he undergoes. He’s known for his comedic roles but has shown here that he could excel in dramatic roles as well.

Dhokha: Round D Corner is a thriller with plenty of twists for sure. Watch it if you have a yen for psychological thrillers.


Dhokha: Round D Corner Story: A husband and wife duo is on the verge of divorce when a terrorist invades their home and takes the wife hostage. While the woman suffers from a delusional personality disorder, her husband is accused of cheating on her. Both give differing versions of reality. So, which one of them is lying?

Dhokha: Round D Corner Review: The movie cuts straight to the chase, and during the opening song, one discovers that once loved-up, Yatharth Sinha (R Madhavan) and Sanchi Sinha (Khushalii Kumar) are now on the verge of separating. After a fight, when Yatharth goes to work, a Kashmiri terrorist on the run, Haq Gul (Aparkshakti Khurana), invades their home and takes Sanchi hostage.
When Yatharth sees this on the news and rushes back to the apartment complex, he meets ACP Harishchandra Malik (Darshan Kumaar) and tells him that Sanchi is mentally ill and dangerous when she has an episode. Sanchi, on the other hand, tries to persuade Haq that her husband is trying to prove her crazy as he’s having an extramarital affair with her psychiatrist.

The situation is similar with Haq Gul and ACP Malik, as they give contradicting versions of the former being a terrorist and a bomb blast accused. Throughout the movie, the audience guesses who’s telling the truth.

A suspense thriller that relies on situations and dialogues, and is primarily shot in one location, must engage you enough to sit with rapt attention. Director Kookie Gulati’s outing leaves much to be desired on this front. The movie becomes monotonous and repetitive quickly, though it picks up pace in the second half when things turn more confrontational. The big plot twist may seem mind-bending only to viewers unfamiliar with the genre; the turn of events is rather predictable. The tracks, characters and backstories are not developed enough to be convincing or impactful.

The above is especially true for Sanchi’s character, who suffers from a delusional personality disorder. The audience only has her husband and psychiatrist’s word to take for it, and just one incident hints at her condition. There’s a scene where Yatharth says that Sanchi can manipulate someone to get what she wants, and that’s her mind’s vulnerability. Before you can appreciate this perspective, Malik asks if it’s vulnerability or skill, and the two men chuckle. This and showing Sanchi as someone who’s either manipulative or distressed owing to her condition does a disservice to people with mental illnesses, especially those with personality disorders that are seldom understood adequately.

That being said, as a debutante, Khushalii pulls off the dichotomous act as a delusional, manipulative and seductive housewife and a volatile woman well. Aparkshakti is impactful as Gul and emotes effortlessly whether the character is angry, disillusioned or befuddled and helpless. He does justice to the Kashmiri twang and looks. R Madhavan and Darshan Kumaar are good, but this is neither actor’s finest performance.

You may enjoy the movie for its performances, but if suspense thrillers are your jam, you may feel deceived.