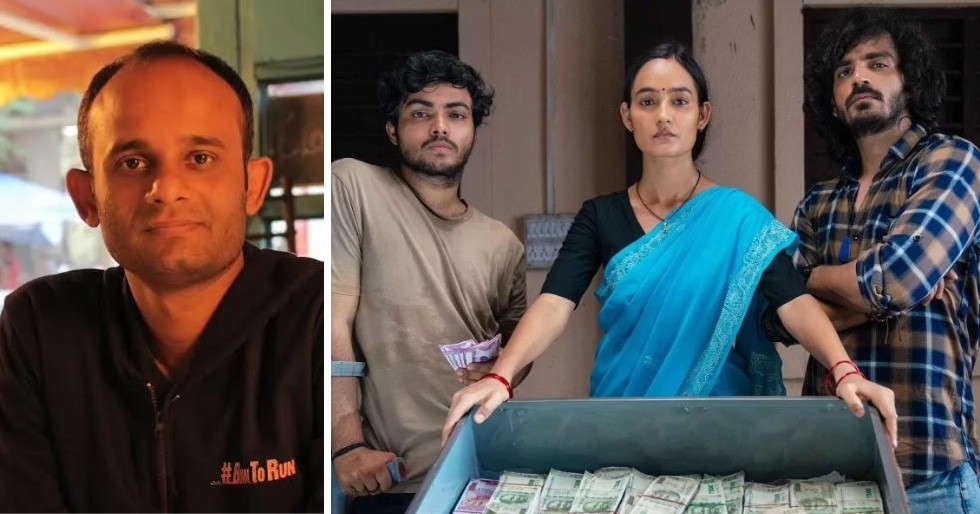 There exists a massive fan base for crime shows and shows that highlight the endless fixation on money. The crime genre has seen a steady influx of captivating series from Mirzapur to Scam 1992. Amidst the slew of bloody, gritty titles, Jamtara came as a largely bloodless sleeper hit. But after season 1 and the recently released season 2, it’s pretty clear why one shouldn’t be sleeping on this tale of phishing scams set in a seemingly uneventful district in Jharkhand. With key cast members including Monika Panwar, Sparsh Shrivastav, Amil Sial, Dibyendu Bhattacharya, Anshumaan Pushkar and others returning, the second instalment gets political. Soumendra Padhi, the creator and director of Jamtara conjures up fresh startling cybercrime stories and it’s more timely than ever.

In an exclusive interview, Padhi opens up about the crime genre and why the craze for money has us all hooked.

What did you want to do differently with Jamtara season 2?

There were a lot of things left to explore after Season 1 – where do the SIM cards come from? Where do the documents come from? Where does the money come from and where does it go? Also, many new scams have surfaced. For example, Sunny and Gudiya do not have the option of leaving Jamtara. They must fight back and to fight back they have to choose the political way. While they get money through phishing, OTPs aren’t working anymore. So they must invent new scams – phishing is driving the elections and similarly, Brijesh is up against Gudiya (Monika Panwar) who is supported by his own bua (Seema Pahwa). So they collaborate with new scammers. The season explores how phishing goes hand in hand and how one is impacting the other. That was the theme along with revenge. It’s almost like a David vs Goliath story.

While the crime genre is full of stylised, gritty films and shows, Jamtara maintains its realistic tone…

When I first read the Jamtara pilot, it was set in Jharkhand. Most Indians wouldn’t know where to place Jharkhand on the map. It appeared to be a very mysterious place with mysterious characters. It’s like the call is coming from some village where boys and girls were seated in some bamboo field where they’re calling and looking at people from all over India – people with white-collar jobs, from lawyers to teachers. So we wanted to explore that. It’s so deep-rooted in reality that there’s no other way to tell this story. The other thing that intrigued me is that there is absolutely no bloodshed. Their only weapon is a mobile phone. They’re not going to shoot you, they’ll just call you, have a great conversation with you and in the end, they’ll convince you to give them an OTP. Had it been a crime involving bloodshed I wouldn’t be interested in it. You don’t see blood in season 1 also because they don’t need to do that.

What films and shows have influenced your filmography?

Many filmmakers have influenced me over time. I’d say from watching Shawshank Redemption, 400 Blows, October Sky, to Anurag Kashyap films, to Queen’s Gambit. I have had multiple influences and different styles of filmmaking. So because I’ve been fed so many kinds of movies. It has been a mix so I’m trying to find my own voice and my style of filmmaking with the stories I choose and the characters I pick.

Ahead of Season 1, we went to Jamtara. The flight landed in Ranchi from where we took a road trip. It’s a beautiful place with lovely people, and beautiful languages, it’s a melting pot of different cultures and it has natural beauty. But while there’s beauty there’s also crime and kidnappings. The new era of technology with SIM cards and easy access to the internet and unemployed youth created a different cocktail. It’s a small place with a small population and there are only 30 mobile shops. If you go there, you realise entire families are into phishing. Their mud houses have been replaced with palatial buildings all thanks to phishing money. Also, the people don’t really have a sense of regret because some are children of farmers or absentee parents who died of alcoholism so they choose this path since it’s a little easy and there is no bloodshed. Compared to kidnappings this was easier for them and they gained a lot of money from it. They are also quite naive. They don’t know they are playing with fire. Initially, the cops did not believe that something like that would happen. We went to a police station, we saw sets of TVs, unregistered luxury cars, posh chairs and there was a 13-year-old boy who had scammed a Supreme Court lawyer somewhere in Delhi. And his father was requesting the police to let him go. Those were the kind of experiences we had. At the same time, the girls also started getting involved in scams and they were all under 18. They haven’t been to schools but they are amazing at the art of conversation. We aren’t ready as a system to deal with these issues. All these factors intrigued us.

Why do you think audiences are hooked to shows like Money Heist and Scam 1992 that highlight the craze for money?

Money is something that the current youth is able to relate to because they want certain things and they are unable to balance the morality of what is right and what is wrong. In a materialistic world, money has that connection, everybody needs it at different stages of life regardless of background. And we always end up doing work that we don’t like but we do it for cash so it’s very relatable for all of us. It’s difficult to choose from the heart and sometimes we just do it for survival. Somewhere most characters have that dilemma to choose between right and wrong. How far would you go for money? All of us face that question in life. Also, these shows have the binge factor – all the hook points are right, and freeze points are right in each episode. Jamtara has a connection since everyone has received a phishing call while Money Heist has a connection because it’s about the pursuit of money and it’s done in a very interesting way.

You have assembled a reliable cast with the addition of Seema Pahwa, what did she bring to the show?

Seema Pahwa had already seen season 1 and the moment we approached her she was super excited. On a zoom call, she agreed to do the show and she’s such a great human being and collaborator. She took care of her younger co-actors. Similarly, Dibyendu and Amit Sial brought their amazing experience from theatre and were so good with the young actors meanwhile the younger ones are hungry to do better and prove themselves. And there was so much freedom given by the platforms to explore as long as we do a good job. That really worked for us in seasons 1 and 2. The ecosystem supports us to do this kind of work.

This season is a lot more political, how did you balance between directing Jamtara as a crime drama and a political drama?

The people of Jamtara have a lot of money and they don’t know what to do with so much cash at a young age. This section of society has been repressed for so long that money is enough. They also want power and to have a larger say in things. So they choose politics and many fund political parties. We followed the characters throughout. The directorial choices were not melodramatic. We just wanted to do what the characters would do. That’s how we stayed grounded in reality instead of adding something just to boost the show. It wasn’t forced.

With Delhi Crime winning an Emmy, there has been considerable international buzz around Indian originals. How much of a motivation is that?

I think Delhi Crime is a path-breaking show, it’s fantastic. Both seasons managed to match expectations. Indian stories, Indian cast and great performances and amazing filmmaking. There are no major stars in it and that’s very encouraging. That’s what happened with Jamtara also – we have actors who have been waiting to get their chance and they got it on a major streaming platform backed by a big studio. New actors who are good and are given the right opportunities can succeed. In the industry, it’s a huge inspiration. I think now we can’t complain about nepotism because actors are getting chances.

There is this one cinematic moment in season 2 – a tree with many mobile phones hanging off the branches and their screens casting reflections in the sun. What went into its making?

Season 2’s most defining visual was the mobile tree with multiple mobile phones hanging from the branches. There are different trees in Jamtara where these scammers go to hang phones after they’ve made 15-30 calls. The cops get there and they don’t find the scammers – it’s no man’s land. So even though cops want to convict they see unregistered phones with unregistered SIMs so there is no way to find these guys. Earlier, they made calls from their fields and their homes where their location can be traced so there are chances of getting caught. So they’ve invented this idea to use phones and then tie up these mobile phones to evade cops. There are many such trees in Jamtara and we needed one imposing tree that would become a larger-than-life character. The shooting process for this was very special.
The crime genre is always evolving. What are your thoughts on how the specific genre of scams is growing on screen?
The genre of crime series about scammers is that people are intrigued by scammers and how they carry out the scam. The focus isn’t on the crime, it’s on the scammer because audiences find that very mysterious. They feel like magicians of sorts. So we rarely empathise with the victims. We are more interested in the guy who committed the scam. From Money Heist to Ocean’s 11, you’ll find yourself following the protagonist and how they pull off the heist. Viewers want to know the mysterious process.

Jamtara season 2 is currently on OTT.