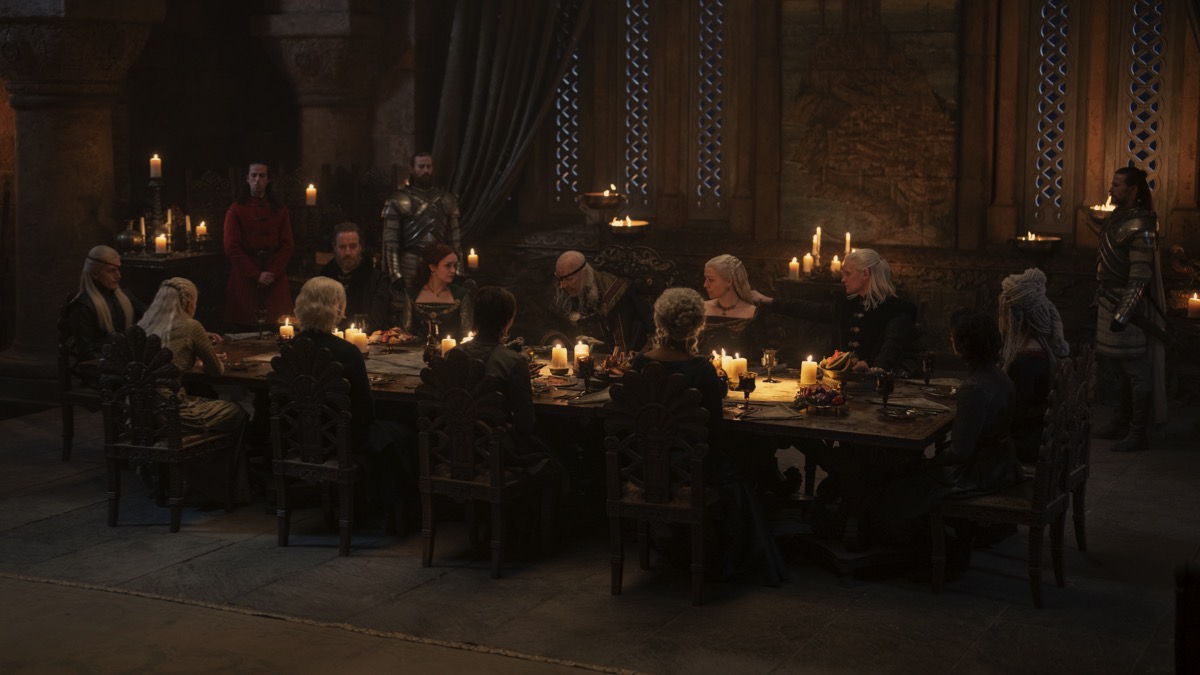 King Viserys looks awful, a prince commits rape, marriage deals are made, truces and made and quickly broken, and viewers have been set up for all hell to break loose with the latest episode of House of the Dragon.

As a consumer of too much television, I share my thoughts on a few of my favorite TV shows. Here are a few of my miusings [sic] regarding the “The Lord of the Tides” episode from TV House of the Dragon:

Reminder: I have never seen Game of Thrones, so some of the references and Easter eggs are lost on me.

We have another time jump, and King Viserys Targaryen seems to be near death. Viewers are “treated” to some lingering looks at his numerous lesions. In other Targaryen developments, the King and Queen’s son Aegon raped one of the maids. While the Queen believes the maid’s allegations, she basically pays her to keep her mouth shut and then gives her some “miscarriage” tea. Yum.

Questions linger about Princess Raynera’s children’s paternity. There is a hearing regarding who should rule Driftmark because it seems Lord Corlys Velaryon has died at sea. Lord Corlys’ brother Vaemond demands he be made Lord of the Tides. Queen Alicent and Otto Hightower have been left to rule in the King’s absence, and they are likely to rule in favor of Vaemond.

Plot twist! King Viserys makes a grand, yet extremely slow, entrance to the hearing. He uses his power and names Princess Raynera’s son Luke Velaryon as heir of Driftmark, and that’s that.

Vaemond verbally names the Velaryon boys as bastards and the king demand’s his tongue be cut out, but surprise — Daemon cuts off Vaemond’s head from his lower jaw — so that’s that.

The king and his family meets up for a family dinner – why not? At the king’s urging, the family makes nice with one another. They raise their glasses, toasting one another. It looks as if Queen Alicent and Princess Raynera are on their way to patching things up. It does not look as if that will last long as a delirious king makes a declaration to Alicent that was meant for Raynera.

Earlier in the episode, Rhaenyra asks her brain-addled father if he still believes in Aegon the Conqueror’s prophecy about “the prince who was promised,” meant to unite the realms of men against an unknown evil gathering in the north. At the time, she gets no answer from Viserys. But here, in what very well may be his final few minutes on earth, Viserys finally speaks his answer.

Viserys’s words, meant for Rhaenyra, are spoken to Alicent instead, and she interprets them as she hears them: her dying husband wants his awful ass of a son Aegon on the Iron Throne, not Rhaenyra.

Shortly thereafter the king breathes his last breath. The king is dead.

THE LATEST ON SL