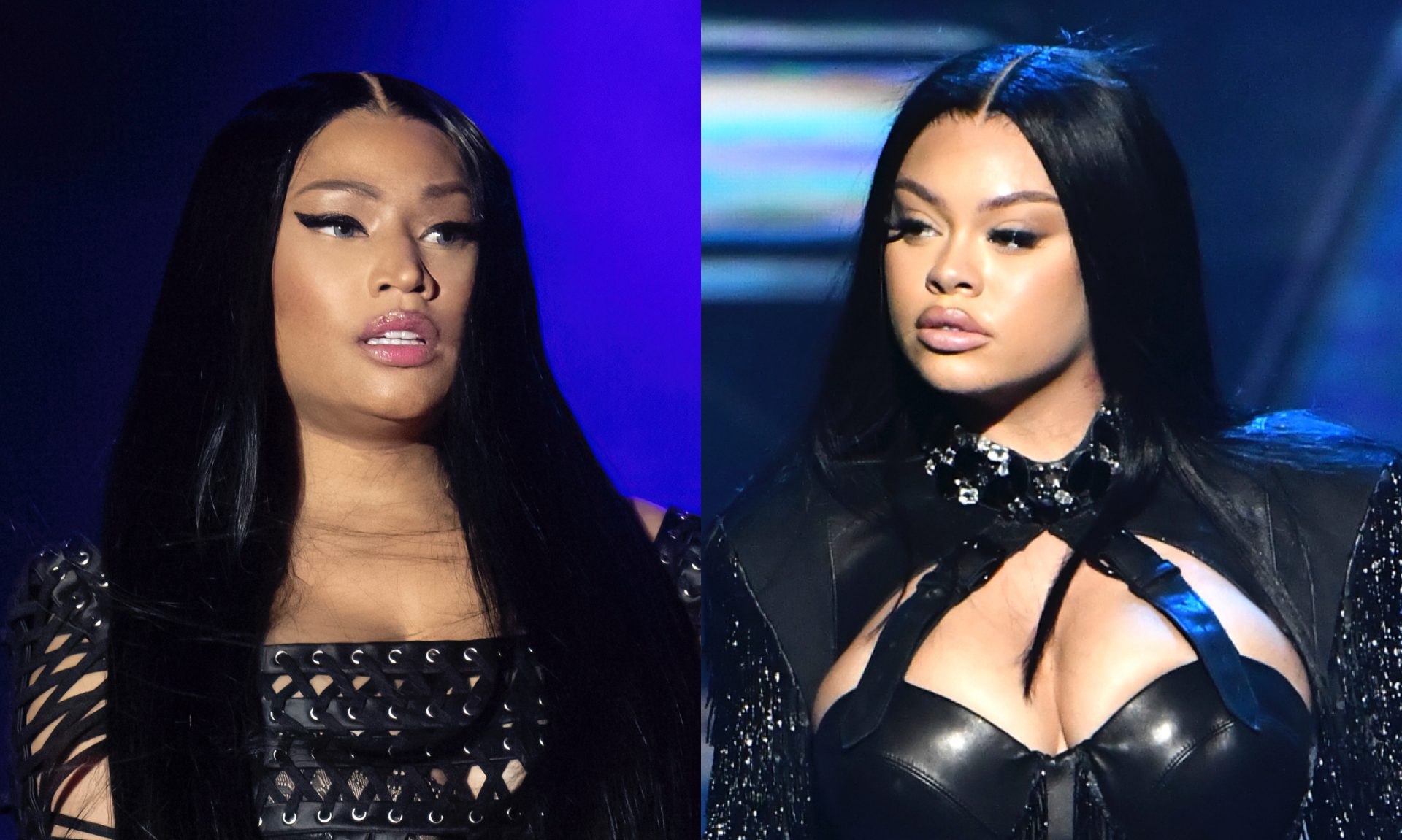 Nicki Minaj and Latto had a time last night online! Both rappers put an @ to their insults and went talk-about-your-family personal with it. There were jabs about age, looks, associations with criminals, fake activism, and more.

Nicki sparked the trending conversation about the Recording Academy and how they place records for award nominations on Thursday (October 14). She expressed dissatisfaction with the categorization of Super Freaky Girl from rap to pop in an Instagram Live. Nicki used Drake as an example of an artist who shared the same critique in 2017 when Hotline Bling won a Grammy in the rap category despite being a pop song.

Then, she began to compare the sound, production, and delivery of lyrics in other songs listed in the rap and pop categories, including Latto’s Big Energy.

“If Super Freaky Girl is pop, then so is Big Energy,” Nicki said on Instagram Live. “If you move Super Freaky Girl out of rap and put it in pop, do the same thing with Big Energy. Same producers on both songs, by the way.” She added, “let’s keep sh*t fair. Even when I’m rapping on a pop track, I still out rap.”

Not long after the live stream, Latto seemingly responded in a tweet. She wrote, “damn, I can’t win for losing…all these awards/noms I can’t even celebrate.”

Nicki Releases A Private Text From Latto, Calls Her A Karen

Following Latto’s subliminal response, Nicki shared a tweet revealing a text message allegedly from the Clay Co. artist. Nicki pointed out that Latto was a supposed fan but refused to back up her point about the categorization of Super Freaky Girl.

“This Karen has probably mentioned my name in over 100 interviews. Says she waited in line for Pink Friday w/her Barbie chain on, bangs, pink hair…but today, scratch off decides to be silent; rather than speak up for the Black woman she called her biggest inspiration,” Nicki tweeted.

The text message screenshot said, “I agree w you however, because of where we left off ion think u need to bring my name/song up to prove ur point.”

Afterward, Big Latto wasted no time putting an @ on it. She replied directly to Nicki’s Karen/Scratch-off tweet, claiming that coming to the internet is exactly what she didn’t want–this time or earlier this year.

“…I wanted to speak up cuz like I said I do agree but the way u going about it seems malicious esp. after how we left off,” Latto tweeted.

In a separate tweet, Latto added, “I’ve ignored countless subtweets since March and instead addressed u in the DM. You’re asking why I didn’t speak up in your defense…it’s the same answer I gave u when u asked why I didn’t congratulate you. Ur literally older than my mom tryna be a bully @NICKIMINAJ.”

And the back-and-forth continued with Nicki replying to Latto’s tweet about being a bully. She flipped the age insult and wrote to Latto that “all this time [Nicki] thought [Latto] was at least 35.”

At this point, the growlz began pulling alleged receipts on each other. Latto claimed that Nicki has been targeting her in shady posts online, including one about unfollowing a “dud.”

But Nicki shut that claim down, instead saying the dud tweet was about a TikTok creator. The creator, also a Barb, later backed up Nicki’s story and revealed herself as the person who was unfollowed.

“Age shaming when you look like YOU the one pushing 40. Age shaming but was BEGGING for a feature. Imagine what dem genes gon do in 10 years,” Nicki tweeted. “Oh so you in your 20s. Oh ok then. At least it match your album sales. You sold 20K right? Mad u flopped. That’s why u rlly mad.”

Latto followed Nicki’s denials with more alleged receipts of subtweets against her. Additionally, she claimed Nicki didn’t deny subtweeting her when they spoke on a phone call. Nicki followed up by dropping her receipts–of Latto asking for a feature in multiple messages.

Each time, Nicki declined. In one message, she told Latto that they’ll both know “when it makes sense” to work together–perhaps after one of Latto’s tracks is “already making a cultural impact.”

And the words nor the sharing of receipts ended there. Latto doubled back, calling Nicki “meticulous w her shade” while agreeing with a tweet about Nicki snubbing her on Queen Radio. She also shared DMs with Minaj that showed she initiated a conversation on September 4 about the alleged subtweeting.

“Wassup? I’ve shown u nothing but the utmost respect & genuine love as a FAN & someone who looked up to you,” Latto said in the initial message. “Hate that u allowing ppl to convince u otherwise. U know what I meant.”

Denial was a common theme among the women in their war of words. The Atlanta-based rapper reiterated her point about why she chose to be silent regarding Nicki’s Grammys blast. She claimed the rap superstar told her on the phone that she’s “not flourishing and no one cares about [Latto’s] little song.”

By the end of the heated exchanges, however, Latto apologized for scrambling Nicki’s words and released a secret recording of their phone conversation.

Lemme specify I’m sorry. Im delusional for saying “we’re” (newer female rappers) are flourishing & u said no one cares about my little song LYRICS my bad. FYI I only recorded cause I KNOW who tf I’m playing wit #40yroldbully https://t.co/ocBAA3uVeF pic.twitter.com/RHqEu8XFYD

But before the online feuding with Latto’s recording, each of the women hurled more insults. Latto continued to claim Minaj has been subtweeting her and dragged Nicki’s older brother Jelani Maraj and husband Kenneth Petty into the mix. Though she didn’t namedrop Jelani or Kenneth, they’ve been involved in sexual assault incidents involving minor girls.

In 2020, Jelani was sentenced to 25 years to life in prison for repeatedly raping an 11-year-old girl inside his home in 2015. In July, Kenneth was sentenced to three years probation and 12 months of electronic monitoring for failing to register as a sex offender in California. Registration is part of Kenneth’s conviction for the first-degree attempted rape of a 16-year-old girl in 1995.

“BEEN subbing…super freaky grandma is married AND related to f**king rapists,” Latto tweeted. “You ain’t gone bully me B***H! My idol turned rival now u hating!”

Minaj Accuses Latto Of Being A Fake Rape Advocate

Latto going low with her clapback didn’t stop Minaj from delivering her own sting. The Barbz leader accused Latto of not caring about her association with rapists when she was seeking a feature and making other career moves, including choosing producer Dr. Luke for Big Energy.

Nicki also accused people online of letting others “weaponize the WORD rape when they’re being dragged.” The rapper also said people don’t hold others accountable for not caring about rape victims “in real life.”

Nicki also tried to run the related-to-rapists insult in Latto’s direction. She retweeted a fan account claiming that Latto’s father was in his late 30s when he impregnated Latto’s mother.

However, according to multiple outlets, the man’s name in the tweet is not the same as Latto’s father’s. Latto did not respond to this particular claim, even though Nicki called for her to “explain this sh*t.”

Nicki has since deleted the majority of her tweets about and in response to Latto. At the time of publication, on Friday evening, the women hadn’t traded any additional insults.